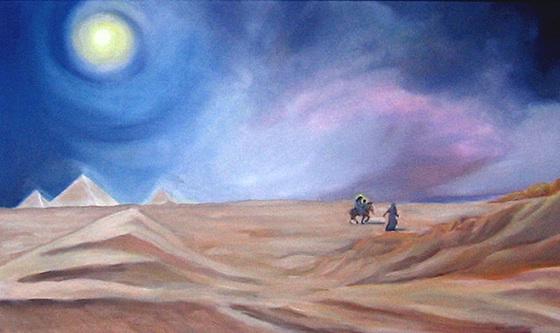 When Jesus was born, Herod the Great was nearing seventy and had reigned over Judea for more than thirty years. History remembers Herod as ruthless and paranoid, a ruler whose primary objective was to cling to power and eliminate any threat to that objective.
His paranoia may have stemmed from the awareness of how tenuous his position was. Herod was the king of Judea but only as a vassal for the Roman Empire.

Besides, Herod was not of royal origin and owed his position to his father’s good relations with Julius Caesar. Ethnically he was not Jewish, though some suggest he had a Jewish mother. Whatever that may be, not being of a royal family, his Jewishness in question, and being appointed by Rome meant that he had no natural claim to the throne and was almost as alien to the people he governed as those whose rule he was appointed to enforce. Naturally Herod felt threatened when the Magi appeared at his palace, asking to see the new-born king of the Jews.

There were many things wrong with Herod, his paranoia, his violent rule, his subservient relationship with Rome, but I wonder if at the bottom of this was the realization that he wasn’t who he wanted to be. He was not of the Davidic line, he was not of nobility, and thus had no legitimate claim to the throne.

You know that I grew up in Germany and while the Kaiser went into exile to Holland in 1918, nobility lost its power, though not necessarily its wealth, and Germany has been a republic since the founding of the modern German state in 1949. However, former nobility still carries names that reveal their ancestry and pedigree. When our eldest was born we joked that we would give our child the middle name “von”, as a sign of nobility. Herod was king and yet he was not who he wanted to be.

While I never regretted not to have been of nobility there are other things that I wished I had had. When I entered seminary I discovered that perhaps a third of my fellow-students were pastor’s kids and they had grown up with different dinner conversations than I had. I was jealous. And there have been other things I wished I had had, not so much as having but as being.
Now that I am growing older I realize that my body will eventually provide challenges and when I hiked up Black Tusk last October I not only enjoyed being outdoors but was relieved that I could still do it in a day, knowing that there will be a day when I won’t be able to.

Herod was not of noble birth and he had no right to the throne of Judah, except through his and his father’s power plays as Roman collaborators. The thing though is that he did not have to take this path and had he not taken this path, he may not have become a murderer. We do not know enough about Herod to know where such a place of departure could have been. But children rebelling against their parents is entirely normal and we know that St Francis of Assisi publicly divorced his father, his father’s expectations, and his father’s wealth, choosing poverty as his bride. Those who follow Jesus are asked to choose God above all else.

When the magi appeared at his palace Herod was getting on in years, and the deeper the patterns of our behaviour, the harder it is to change. So it is no surprise that one who had for most of his life tried to treat his fear and paranoia with violence would resort to murdering all of Bethlehem’s children two years old and younger. But it did not have to be this way.
For us, I wonder, if our response to the war in Europe could be something other than cheering on one party and instead grieving with the mothers and fathers of all who have died, and continue to die, for God is the God of life.

It is a curious thing that the lectionary brings us this story today (and on Holy Innocents on Dec 28), before the feast of the Epiphany. It follows on the heel’s of St Stephen’s Day, the first martyr of the nascent church. I imagine this is so we would remember that our salvation was wrought on the cross and not under the Christmas tree, and that the life of those who seek to follow Jesus is in many ways counter-intuitive.

The Slaughter of the Innocents turns the Holy Family into refugees. The point here is not that God did not save the others but that God saved the One for the sake of the others.
In the case of Jesus that means that Jesus was saved so he could die.

The pattern of Jesus’ life is drastically different from that of Herod. Jesus was God but emptied himself of his power, evident already in the fact that the One who was born in Bethlehem the city of David, became a refugee shortly after his birth, and upon his return grew up in the backwater town of Nazareth.
Jesus was saved so Jesus could die but this saving involved no military might but the flight to a foreign land. This saving foreshadows the love of enemy, the turning of the cheek, and his death on the cross. For Jesus is was better to be killed than to kill.

In Herod’s violence and in God’s response we see two two different ways to live. The way of Jesus is the way of life.