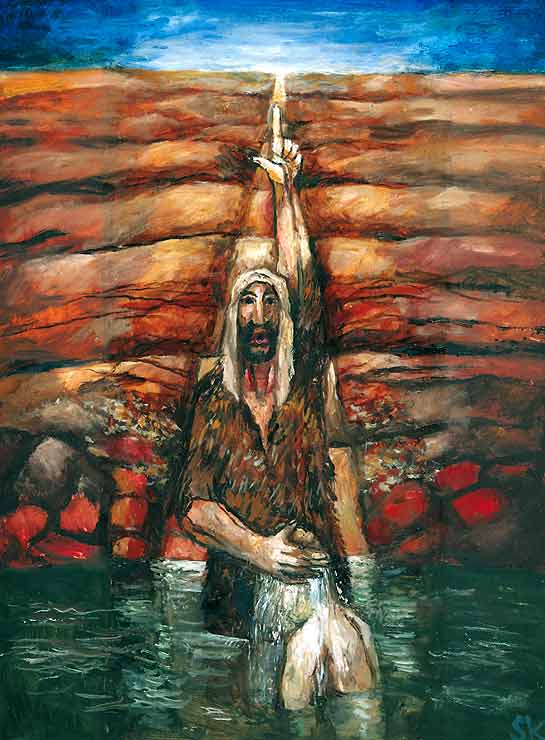 The problem with Inheritances and the Gift of Starting Anew

There are a few annoyances about this beautiful season. On one hand there is the incessant and saccharine Christmas music at the store, and the absence of Christmas carols at church on the other (for apparently it is not Christmas yet). There are a few other things for you to fill in, and finally the appearance of John the Baptist on every Second Sunday in Advent. He speaks of repentance and judgment and thus kills any sentimentality we may have about this season. How do you combine candlelight, short bread, and repentance?
And because these do not compliment each other we remember that before Christmas is to be happy, it is to be about God, which is why we encounter John today. And John’s call to repent reminds us that happiness can only exist where there is truthfulness. And truthfulness involves introspection, soul searching, and repentance. Any happiness that does not acknowledge that the world needs redeeming remains shallow, and shallowness resists God, for it offers no room for God.

Of course, we know that the world needs redeeming, that is why the world longs for Christmas, whether it knows of the birth of its Saviour or not. Yet this Saviour is not like a superhero who works on their own and who identifies the villains always as people other than us, but this Saviour needs us and wants us, and knows that we need saving not just from others but also from ourselves. And John, the guy with the strange diet and appearance, is here to help us.

John is not skilled at rhetoric, or pastoral care. John is brash and abrupt. He tells the Sadducees and the Pharisees that their pedigree does not buy them anything.
Elsewhere it has been said – what we implicitly have known for some time – that it is not the birthrate which makes the church grow but baptism, because it is in baptism that we are made children of God.

It used to be that privilege is what you wanted because who would not want to belong to the in-group, and maybe we want to still. But we now know that privilege comes with strings attached. For one, not everything we inherit is good. We all know this from our family histories. While most of us love our parents, most of us also don’t want to be exactly like them. We are adults now and no longer think that our parents are perfect. The same is true for nations and groups. Some inheritances must be rejected, as literally I had to do with my father’s inheritance, for had I accepted it, I would have inherited my father’s debt.
The other problem with inheritances is that we didn’t earn it. I am not speaking of the family heirloom, the family photo album, and not even of the parental home. Rather, we are not Christian because our parents were, if they were Christian. We are not honorable, because our parents were. We are not virtuous because our parents were. That is what John is saying when he says, “Do not presume to say to yourselves, ‘We have Abraham as our ancestor.’” (3:9)

John baptizes with a baptism of repentance.
Christian Baptism, the Apostle Paul says, is into Christ’s death and resurrection. When we are baptized we die with Christ and we rise with Christ. (Romans 6) There is no resurrection without prior death. Repentance is a kind of death that precedes our resurrection.

The great Rabbi Abraham Joshua Heschel tells a story about Reb Menahem Mendle of Korzk, known as the Kotzker.

One day he and Reb Hirsch of Tomashov came to a bridge where several women began throwing stones at them.

“Have no fear,” said the Kotzker. “They are not real women, or are their stones real. They are mere phantoms.”
Reb Hirsch was silent for a moment, then asked, “Might we not be phantoms, too?”
“No,” came the Kotzker’s answer, “as long as we have at some time had the genuine urge to repent.”1

The urge to repent is the gift of the Holy Spirit. John’s words are harsh and they sound as if we had to pull ourselves up by our bootstraps. Of course, the fact that that is not possible is no excuse not to repent, for repentance makes us real, and makes room for God and for each other.

Repentance makes room because it is a kind of self-emptying. It follows Christ’s example
6 who, though he was in the form of God,
did not regard equality with God
as something to be exploited,
7 but emptied himself,
taking the form of a slave,
being born in human likeness.
And being found in human form,
8   he humbled himself
and became obedient to the point of death—
even death on a cross. (Philippians 2)

We understand what being empty is like when it comes to eating dinner. You can’t eat dinner, when you are not hungry, or at least most of us can’t. Eating without being hungry is another one of our problems, not because of our waistline but because such mindless consumption does not know how do give thanks.

The emptying of Christ is not about consumption, but it is an emptying of power and of (rightful) privilege, for the Son of Man did not come to be served but to serve and to give his life as a ransom for many. (Matthew 20:28) If our repentance then involves an emptying of our privilege and of our power, it is none other than following the example of Christ.

And as there can be no resurrection without first dying, so the promise of our repentance is a life that is real and not a phantom, and a life that is filled with the joy and the presence of God.

1 Abraham Joshua Heschel. A Passion for Truth, New York, NY: Farrar, Strauss, and Giroux 1973, quoted in John Shae, The Spiritual Wisdom of the Gospels for Christian Preachers and Teachers, Year A, On Earth as It Is in Heaven, Collegeville, MN: Liturgical Press 2004, page 36